The BizTalk Health Monitor (BHM) is a tool that can be used to analyze and fix issues in the BizTalk server environment. The predecessor of the BHM tool, the MessageBox Viewer (MBV), was initially built as a hobby project by one of the Microsoft Support Persons. BHM can identify potential issues in the BizTalk environment and let the administrators know, amongst others:

BHM has over 400 rules to verify different things on the BizTalk server environment and gathers the results that provide information on the health of the environment. BizTalk360 takes advantage of the power of BHM and comes with a first-class integration into its architecture. So, what's different in BizTalk360? By integrating with BHM:

Once the BHM is installed and configured in the server where BizTalk360 is running, the reports will start getting generated depending on the value set in the "Message Execution" section under "Settings". For instance, if the schedule execution value is set to 'Monday to Friday at 0900 hrs", the background monitoring service (sub-service) "BMH Schedule" will run the BMH every day from Monday to Friday at 9 AM, gather the report, persist the information in the BizTalk360 database, and display the report in a user-friendly format in the user interface. The reports will be available in a drop-down in the BizTalk Health Monitor - Reports page. When the result is selected, you can see the list of:

BizTalk360 does not bundle BHM during installation due to the Microsoft BizTalk Health Monitor licensing restrictions. Therefore, you must manually install BHM separately in the server where BizTalk360 is installed.
Follow the steps as shown below to configure BHM:

BHM Snap-in allows monitoring multiple BizTalk environments from a single MMC. When you register BHM on a BizTalk server, by default it will add a “group” node representing the current BizTalk group configured for this server. You can, however, add additional nodes corresponding to different BizTalk groups by specifying its name, the location of its Management database and the output folder.

Once a group node is added in the BHM hierarchy, you can start immediately to analyze its corresponding BizTalk group by right-clicking on the node and select the “Analyze now” menu item. The analysis consists of running a number of queries to collect all important information about the BizTalk group, evaluating a set of rules for each of them, and raising any warnings (critical or not).
Note: The engine, the queries, and rules repository are the same as used by MBV.

You need to run the BHM in the BizTalk Server at least once before configuring BHM in BizTalk360.

Once BHM is installed in the server where BizTalk360 is running, the administrator needs to configure the integration with BizTalk360. You need to run the BHM from BizTalk360 under "BizTalk Health Monitor (Reports)" section once you have configured BHM in the Settings screen. 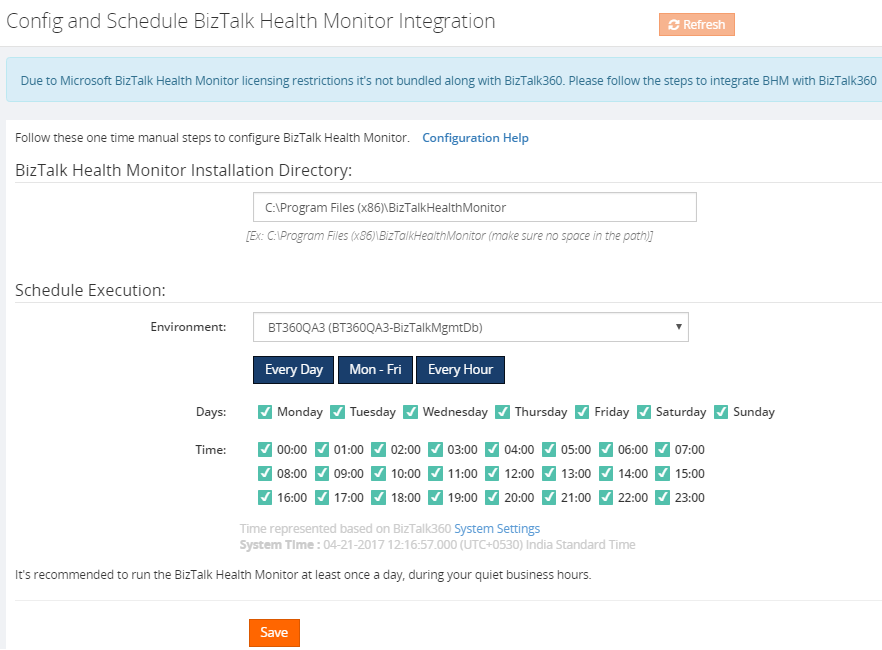 Follow the steps as shown below to set up the integration:

In addition to scheduled execution of BHM, BizTalk360 allows you to run BHM whenever they want to get the information on the status of the environment. When the 'Run BHM Now' button is clicked, the BizTalk Health Monitor will be scheduled to run in the next cycle (which is usually within the next 60 seconds since the BHM Schedule monitoring service is scheduled to run every 1 minute). BizTalk360 will display a message as BizTalk Health Monitor is scheduled to run in next cycle, normally within a minute or so. Check back after some time. Depending on the time taken to retrieve the result from BHM, the results will be made available in BizTalk360 within a minute or few minutes. After few minutes, you can click the Refresh button to view the results in the drop down.

Follow the steps as shown below to view the BHM Reports:

The example shows you to view BHM Reports (critical errors, non-critical errors, header information, summary report. You can select the report from the drop-down and click the export excel button to download the BHM Report.

BizTalk360 integrates with BHM to provide administrators the ability to monitor the amount of critical and non-critical errors identified in the report. As an administrator, you can set alerts to be notified when the BizTalk Health Monitor reports critical/non-critical errors exceed a specific value, say 5 and 10 respectively. BizTalk360 can trigger a notification to your preferred communication channel (SMS, Email or any other configured notification channels) when there is a threshold violation.

This issue mainly happens on a 64-bit machine. When you accept the EULA displayed by BHM, it writes the acceptance setting in the 64-bit registry hive.

But BizTalk360 is 32-bit due to restrictions imposed by dependency objects like ExplorerOM, hence it always looks at the 32-bit hive (WoW64 in a 64-bit machine). To fix this issue, please create following entry in the registry.

You can either create the above keys manually by opening regedit.exe ("Run as Administrator") or download this .reg file (unzip first) and then double-click to import.

Was This Article Helpful?

We use our own and third-party cookies to understand how you interact with our knowledge base. This helps us show you more relevant content and ads based on your browsing and navigation history.